Less than a month into his presidency, U.S. President Joe Biden has already stated that he will impose sanctions on coup leaders in Myanmar. Other White House officials have also suggested that sanctions against Russia are being drawn up following the recent jailing of opposition leader Alexei Navalny. In this context, we thought it would be useful to consider what sanctions entail, what goals they serve and what factors make them most effective. For the purposes of this review, we examine sanctions against state actors and their citizens, as those imposed against non-state actors like terrorist groups involve different considerations.

Simply put, sanctions are a broad array of penalties applied by one or more countries against another. They are most commonly economic in nature, but can also involve political, social and other forms of punishment. Although the widespread use of sanctions took off in the 20th century, particularly following World War II, examples extend back to classical antiquity.

The Role of Sanctions

Sanctions also have come to serve several other functions in which their effectiveness may be harder to judge.

How Sanctions Are Applied

Notably, many sanctions can be applied either comprehensively against an entire country (for instance, banning certain forms of trade) or in a more targeted fashion (such as freezing the assets of particular people linked to the ruling regime). Both of these methods, however, involve complex tradeoffs.

As these examples demonstrate, sanctions often can succeed on a tactical level, but fail on a strategic one. That is, they can accomplish their immediate purpose, but singularly flop in forcing the desired shift in behavior that is their ultimate goal. Worse, at times they can be strategically self-defeating by creating more problems than they solve. Despite the unique nature of each sanctions process, there are some widely accepted factors that increase the effectiveness of sanctions. 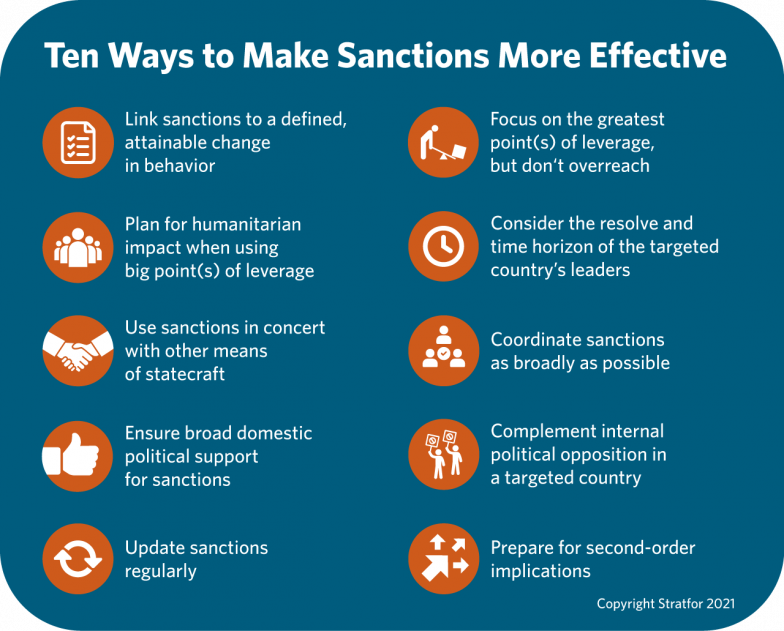 1) Linking sanctions to a defined and attainable change in behavior. Probably the biggest factor that determines sanctions’ effectiveness is whether an imposing country clearly ties them to a specific behavior that a targeted country is willing and able to change. A targeted country has to know what it can do to have sanctions removed and the demand cannot be something that country’s leaders see as a “red line” for their sense of survival.

2) Focusing on the greatest point(s) of leverage while being cognizant of potential overreach. Sanctions’ effectiveness relies on an imposing country applying them where a targeted country is vulnerable to an imposing country’s penalties. Otherwise, sanctions may prove much more “bark” than actual “bite.” That said, an imposing country also must weigh whether using its outsized influence could reverberate in ways that backfire.

3) Considering the humanitarian costs. Although sanctions generally are more effective when an imposing country uses its largest lever(s) of influence, doing so often has significant negative repercussions for the common people in the targeted country, and can also undermine sanctions’ ability to alter a targeted country’s behavior.

5) Using sanctions in concert with other means of statecraft. Sanctions can, in some cases, be effective on their own. However, they are almost always more powerful when combined with and complemented by other actions to pressure a targeted country to alter its behavior, including incentives (like diplomatic engagement) and disincentives (like military force).

6) Coordinating sanctions with other global players. Simply put, sanctions are more likely to affect change when they are supported by as many countries as possible, especially when coordinated through an international institution to increase their perceived legitimacy and mitigate against possible sanctions fatigue. That said, even if there is broad global support, one influential outlier can provide a targeted country with a sufficient lifeline.

7) Ensuring broad domestic political support. Broad support for sanctions is helpful not only at the international level, but also at the domestic one. An imposing country’s leaders must have widespread political backing that can be sustained over time. Otherwise, the targeted country’s leaders risk believing they simply can wait out the current government of an imposing country without adjusting their behavior.

8) Complementing domestic political opposition in the targeted country. Although it is not always possible, sanctions can be especially effective when complementing existing indigenous pressure in a targeted country. Such mutually reinforcing top-down and bottom-up pressure can leave a government with no recourse other than to change its behavior, although it may try to exploit perceived coordination by its opponents.

10) Preparing for next-order implications. Sanctions often create both unintended and foreseeable consequences. Considering these in advance can ensure sanctions’ effectiveness in their own right and that the knock-on effects conform to an imposing country’s broader strategic objectives.