The European Union will remain open to Chinese foreign direct investment (FDI) in the coming years, but will limit China’s access to strategic sectors of its economy (such as technology). Brussels will also continue to confront Beijing over political, human rights and security issues. The European Union and the United States are the Continent’s primary sources of FDI, which limits China’s ability to leverage FDI to gain political influence. Investment in European infrastructure, such as ports and railways, offers Chinese exporters greater access to European markets, while the acquisition of high-tech companies and know-how gives Beijing access to sophisticated technology it can use for its domestic industrial plans. Europe sees the Asian giant as a source of funding, but in recent years, most countries have become concerned about the national security implications of rising Chinese investment. The European Union also wants to make the bilateral relationship more reciprocal, as the bloc is currently much more open to Chinese investment than the other way around. 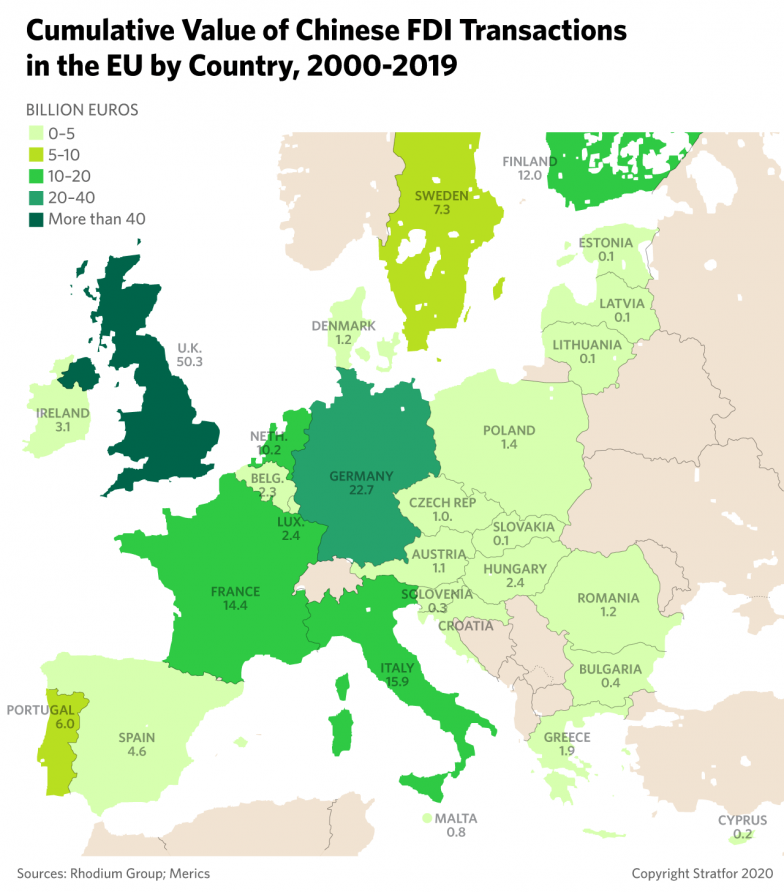 China’s FDI in Europe is mostly concentrated in the large, high-tech markets of western countries. But southern Europe’s closer proximity to Chinese trade routes and Eastern Europe’s more opaque legal framework also offer Beijing strategic investment opportunities. In western Europe, China is looking to access wealthy consumer markets, while acquiring strategic assets and technological expertise. In southern Europe, China is primarily interested in the access or purchase of energy and port infrastructure that can enhance the role of ports in the region that are closer to Chinese maritime routes (as opposed to Northern European ports such as Rotterdam and Antwerp). Eastern Europe, meanwhile, offers China a bridge into more attractive Western European markets, but otherwise lacks the know-how, technology and economic sophistication that China often values when it comes to FDI. China also seeks to acquire technology from Europe through scientific cooperation and by buying into, or even developing science parks or start-up campuses. In addition to its broad strategic goals, China also acquires profitable companies in other areas of the European economy (such as tourism and entertainment), as well as struggling companies in different areas that are in desperate need of cash.

Trade is still China’s strongest lever for political influence in Europe, where countries like the United States, Germany, the United Kingdom and France remain the primary sources of FDI. Despite the European Union’s concern about China, Chinese transactions and projects account for less than 5% of FDI in Europe. China, however, is the European Union’s second-biggest trading partner behind the United States, while the bloc is China’s biggest trading partner. China has tried to use FDI to carve its own sphere of influence in central and eastern Europe through the 17+1 format (which excludes Western governments and EU institutions). But there is a significant gap between the announcement of investment projects and their actual realization, which somewhat limits Beijing’s real influence. More importantly, the European Union has significant investment tools of its own that translate into political influence, such as cohesion funds and agricultural subsidies for the bloc’s central and eastern members, along with pre-accession funds for candidate countries in the Western Balkans. 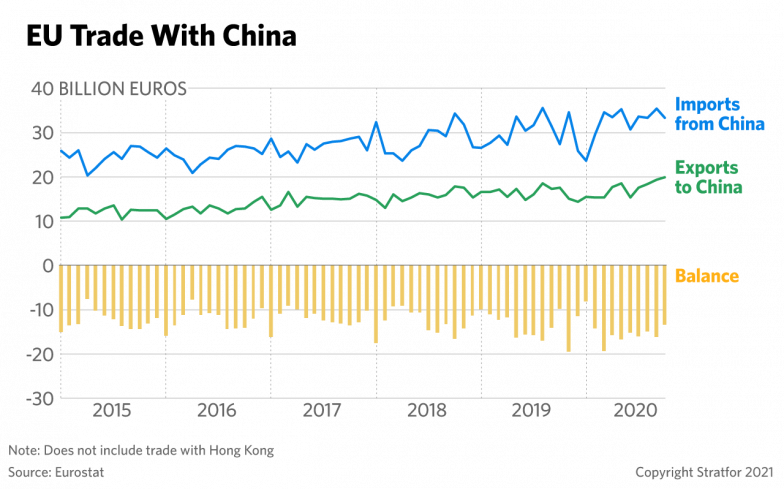 The European Union’s interest in Chinese FDI will not prevent the bloc from confronting Beijing over issues such as political and human rights, as well as China’s increasing demonstrations of military power. But Brussels will be reluctant to impose any meaningful economic sanctions on Beijing for fear of retaliation, especially through trade. The European Union is critical of China’s extensive maritime claims and military buildups in the South China Sea and demands for representation on Arctic issues. More broadly, Brussels also sees China’s increasing military capabilities as a potential security threat to the bloc. The European Union wants China to do more in the fight against climate change as well. In addition, Brussels will continue to criticize Beijing over domestic human rights violations and the crackdown on dissent in Hong Kong, but this will, for the most part, remain political. Given China’s key role in reforming the World Trade Organization, Brussels will also seek to cooperate with Beijing to ensure a level playing field and eliminate unfair practices and subsidies in China, as well as forced technology transfers.